By Bangladesh Media; Three people who law enforcing agencies claimed to be terrorists were killed in gunfights with Rapid Action Battalion (RAB) and police at different places including the capital city on Monday. 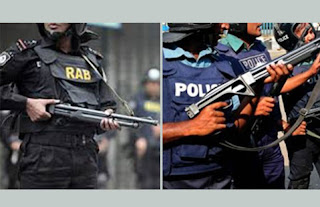 The gunfights took place sometimes between 01:00am and 06:00am of the day.
Our sources from Dhaka reports about these incidents.

Referring to Dhaka Medical College Hospital (DMCH) reports he says, a man who police said to be a terrorist was killed a gunfight with them in Shahidnagar Balur Math area of the city’s Uttar Khan around 01:00am. Deceased Razib, 35, was an accused in several cases including murder and was arrested days ago, said Abul Hasan, officer-in-charge of Dhaka Katwali Police Station.

The second incident took place in Gazipur. RAB Salna camp commander Ziaur Rahman said a gunfight with a terrorist group left one dead in Kumarkhada area of Bhawal National Garden in earlier hours of the day.
The deceased - Rafiqul Islam, 40, was an accused in several cases including arms and extortion, according to the RAB commander.

And the third incident was in Jhenaidah, reports a youth was killed in a 'gunfight' with a petrol team of RAB-6 in Pirojpur Karaitoal area of Kaliganj upazila of the district early on Monday. The deceased was Kamal, 26, son of late Babul Mian of Lebutala of Jessore. He was accused in a murder case, RAB sources said.

Posted by Bangladesh Media at 11:39 AM