By Bangladesh Media; An alleged 'ringleader' of a robber group was killed in 'crossfire' between police and his cohorts at Rajnagar village in Sadar upazila of Meherpur district early yesterday.

Three policemen were also injured in the incident, police claimed. 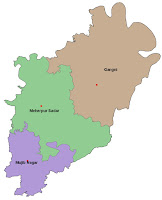 The deceased is Miarul Islam, 45, son of Iman Ali of Nurpur village in Sadar upazila of the district.
A team arrested Miarul, accused in 10 cases including two for murder, from Nurpur village on Saturday evening, said Ahsan Habib, officer in charge (OC) of Meherpur Sadar Police Station.
"Following Miarul's confession, police was taking him to Nurpur village to seize firearms hidden there. When they reached Rajapur Din Dutt bridge around 4:00am, Miarul's cohorts opened fire, prompting the police to fire back. Miarul tried to escape and died, being caught in the crossfire," the OC said.
SI Ahsan Ullah, ASI Abdul Haq and Constable Arjun Kumar were also injured in the half-an-hour gunfight, the police said, adding that three crude bombs, one shutter gun, two machetes and five bullets were seized from the spot.
Posted by Bangladesh Media at 7:03 AM