By Bangladesh Media; Two alleged muggers were killed in a “shootout” between criminals and detective police in Motijheel early yesterday, claimed police.
The wife of one of the deceased claimed that there was no shootout and that her husband was most probably picked up by law enforcers the evening before.Detectives claimed that they had been looking for deceased Ramzan Ali, who has 93 criminal cases filed against him, and Rakib Hossain Aqmal, with six cases filed against him recently.According to the case filed in connection with the deaths, the detectives stumbled upon the two while on patrol. It said the deceased muggers along with a gang of five to six people were waiting to ambush people in front of T&T School and College in Motijheel around 2:45am.In the words of the detectives, the criminals started firing at police and the law enforcers retaliated. Ramzan and Aqmal were killed by the criminals' gunfire during the shootout, the case statement read.  However, sources at Dhaka Medical College morgue said the two had been shot in the head and chest from the front at close range, not from behind. They said the duo were shot 10 times and five of the bullets fired from two guns were still lodged in the bodies. 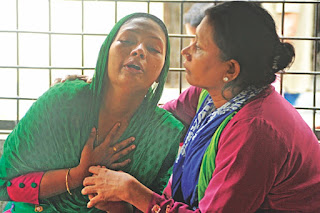 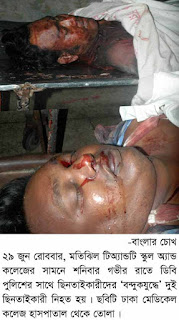 Ramzan's wife Nusrat Jahan Jharna told The Daily Star at their Rayerbagh home that she suspected that her husband had been picked up the evening before and then murdered.
“My husband was missing since 7:30pm yesterday [Saturday]. He left home yesterday afternoon with a friend saying he needed to go to Sayedabad. I last talked to him around 7:00pm [over the phone]. From 7:30pm onwards, his phone was off. That's when I suspected that he might have been picked up because there were several cases against him and detectives had come to our home looking for him,” said Jharna.
She said several individuals claiming to be detective police had come to their home on the night of June 24 looking for her husband.
The police claimed to have recovered two motorbikes, two mobile phones, and two pistols loaded with two bullets each from the spot.

Posted by Bangladesh Media at 7:47 AM