Police has narrated its own known story! Same format, which describes, -Acting on a tip-off .... Sensing police presence...they Opened fire ... which Triggered Gunfight .... and after one hour ... Police found the dead body. 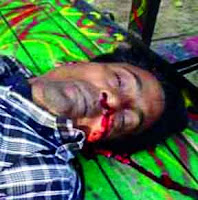 By Bangladesh Media, Quoting assistant superintendent of police Chokdar Abdul Halim in Kushtia the Daily Star's Kushtia correspondent reports that 'a top cadre of Janajuddho, a faction of the outlawed Purba Banglar Communist Party, was killed in a "shootout" between his cohorts and police at Mirpur upazila of Kushtia early yesterday.'

Referring to the police the Daily Star reports 'Police said the deceased Enamul Haq alias Ena Mondol, 35, was a member of the outfit's killing squad and was accused in nine cases.'

Like as usual, the Police has narrated its own known story! Same format, which describes, -Acting on a tip-off .... Sensing police presence... They opened fire ... Which triggered 'Gunfight' .... and after one hour ... Police found the dead body.

Acting on a tip-off, two teams of police raided the backyard of Hidimpur Govt Primary School around 2:15am, said Chokdar Abdul Halim, assistant superintendent of police.

The outlaws were holding a secret meeting there, he said.

Police found the body of Enamul on the spot after the outlaws fled the scene.
Enamul was son of Rafiz Mondol of Musainagar in the upazila.

The teams recovered a rifle, a light gun, four bombs and eight bullets from the spot.
The body was sent to Kushtia General Hospital morgue for an autopsy.
The story told by police finish here!

It could be noted that this is the third report in this year 2013 against RAB -6.

Police recovered the handcuffed body of a BNP leader from Kushtia on January 5, Saturday night, around three hours after he was allegedly picked up by Rab members from Jhenidah.

The dead, Rafiqul Islam Mazumdar, was the general secretary of BNP's ward-56 unit of Dhaka City
Corporation, reports our Kushtia correspondent. He was also vice-president of Bangabazar Super Market in Dhaka and a resident of Shanir Akhara in the capital.

Posted by Bangladesh Media at 8:11 AM