This time they are called as "Pirates". 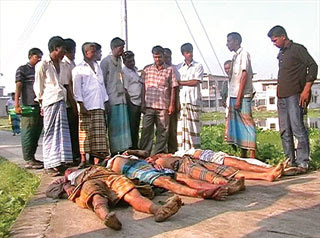 The deceased, aged between 30 and 40, were members of Raju Bahini, a gang of local pirates, said Major Sabbir Osmani of Rab-8. Three of the four pirates were identified as Rawshan, Nati Kamrul and Belayet.


A team of Rab-8 on three trawlers were patrolling the area around 11:00am when they noticed suspicious movements of another trawler on the Bhoirav river near Dhanichabari of the upazila, said Lt Col Monirul Haque, commanding officer of Rab-8, who led the operation.

The Rab team challenged the trawler. Within sometime, passengers from that trawler fired on the law enforcers, prompting them to fire back. At one stage of the firing, the pirates entered a canal of the Sundarbans forest, anchored their trawler and fled. Later, the RAB members recovered four bullet-ridden bodies from deep into the forest.
Posted by Bangladesh Media at 5:24 AM

Email ThisBlogThis!Share to TwitterShare to FacebookShare to Pinterest
Labels: Reports