–“A detailed map of a notorious Bangladeshi torture centre where along with Bangladeshis several British nationals were held and interrogated has been produced by one of its former inmates.” British Daily The Guardian Reports 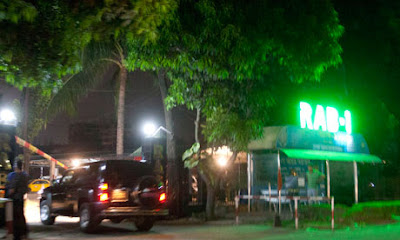 By Bangladesh Media; In the northern Dhaka suburb of Uttara, across the road from a women's medical college, is a compound controlled by a Bangladeshi paramilitary police unit called the Rapid Action Battalion. Just inside the gate, on the left hand side, is an unremarkable office block: white-painted, five storey’s tall, with a green awning over its front door. 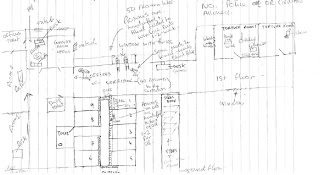 Were you to enter, climb to the first floor, and make your way through the heavy steel door at the head of the stairs, you would find yourself facing a desk and a uniformed receptionist-cum-guard. Corridors stretch to his right and his left. According to a number of those who have found themselves standing at this spot, to venture down either corridor is to find yourself descending into a form of hell.
This is the Taskforce for Interrogation Cell, or TFI, a place where officers from all Bangladesh's intelligence agencies and main police units work together, extracting information and confessions from enemies of the state. The hand-drawn plan of the Task Force for Interrogation cell (TFI) in the northern suburbs of the capital, Dhaka, shows the mistreatment of detainees to be a deliberate and systematic affair.
Some inmates are held in one of nine cells, each measuring 3ft by 7ft, and many more are chained up in corridors, with their hands shackled to the bars of windows above their head. Some, according to the man who drew the map, are hooded and handcuffed and forced to kneel in the corridors for days or weeks.
At the end of one corridor are two torture rooms. One room, which has an observation window, is said to be equipped with pulleys and with a volt meter, to measure levels of electricity. Former inmates say fingernails litter the floor.


Several former inmates say the second room houses a rotating chair into which detainees are reported to be strapped - sometimes after being drugged - before being spun at up to 180 revolutions a minute. This room is also said to house a small library of photographs of people being tortured, which are shown to inmates before their own interrogation.

The methods they employ suggest a great deal of thought has been given to suffering. Men are reported to be beaten, subjected to electric shocks and strapped to a chair that spins at high speed. In one room, fingernails are said to litter the floor. The taking of life during interrogation is not unknown here.
Hundreds of people have been consigned to the TFI in recent years. Among them, the Guardian has established, were a number of British citizens who were detained after Jacqui Smith, then British home  secretary, flew to Dhaka to press the government for greater co-operation in counter-terrorism operations.
A number of people who have survived spells inside the TFI have given accounts of what they saw when they were led further inside. To the left is a corridor with barred windows on its right hand side. Former inmates say dozens of blindfolded prisoners are shackled to the windows, with their hands above their heads. They are said to be kept in this position for up to two weeks. Sometimes they are beaten while suspended this way. One former inmate – too terrified to be identified – says: "Being beaten around the small of the back is standard procedure. They're obsessed with damaging kidneys."
More prisoners must kneel on the floor of the corridor, blindfolded and with their hands cuffed behind their backs.
Running off this corridor, on the left, is a row of nine small cells, each 3ft x 7ft, with a prisoner in each. At the end of the corridor are two offices, a computer room, and a restroom for the torturers. At the other end of the TFI, past the guard, is a corridor with a barred window on its right side and two rooms on the left. Inside the first room is a series of implements – pulleys, blocks of wood, small generators and voltmeters – that are used during interrogation. There is a small window allowing people to stand outside the room and watch what is happening inside.
A man who has suffered electric shock torture in this room recalls: "You're blind-folded, but you can hear them shuffling around you and moving equipment and tools about. Then they start to move you into position and strap you down. You don't know what's happening. And then you feel the most intense pain. It's such a shock because you don't know its coming."
A former TFI inmate told that this is also the room where fingernails are removed. Asked how he could be sure this happened, the man became slightly agitated, raised his voice and replied: "Because I saw the nails on the ground."
Former inmates say the next room houses a small library of photographs of people being tortured, which are shown to people before they too are made to suffer. In the centre of the room, according to several former TFI inmates, is a motorized rotating chair into which victims can be strapped and spun at high speed.
Several former inmates say they were aware of prisoners dying at the TFI. A man who was held in one of the cells said he watched as a prisoner in his 50s, chained up in the corridor, was beaten to death. Several said that when a prisoner died his body was put on a stretcher and an oxygen mask placed over his face, giving the impression “he was alive and receiving medical treatment.”
Posted by Bangladesh Media at 3:08 AM