Earlier, we have reported about this case which was published in different newspapers [1] [2] in Bangladesh as a "Criminal killed in Crossfire"! But now we have gone through a detail investigation where it proves that the victim of this extra judicial killing is not a criminal and eye witnesses described how Rapid Action Battalion RAB-10 Commander Major Kamruzzaman shoot him from a point blank range! And later Major Kamruzzaman was awarded by Sheikh Hasina, the Prime Minister of Bangladesh.
Reported by Anwar Hossain. 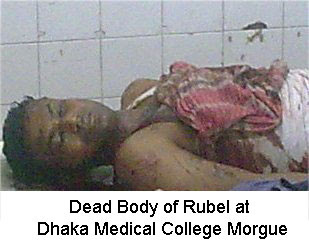 By Anwar Hossain; On 16 March 2010, at around 1pm, Asaduzzaman Rubel went to visit his neighbour Pushpo Akhter’s home at House No. 4 of Garden Road, Sharulia area which is under the Demra police station in the city of Dhaka. A team of the Rapid Action Battalion (RAB) from RAB-10 led by Major Kamruzzaman cordoned the house as soon as Rubel arrived there. The RAB team comprised Deputy Assistant Director (DAD) Delwar Hossain, Sergeant Ferdous Ali, Sub Inspector (SI) Aminur Rahman, Constables Mohammad Ruhul Amin, Mohammad Abdul Quader, Faruk Hossain, Mohammad Pervez and Soldier Mohammad Jamshed. The members of the team, who were in plain clothes, took position at different points of the house including the rooftop of the two-storied building.
A eye witness describing the killing of Asaduzzaman Rubel  by RAB-10 from Human Rights Watchdog on Vimeo.

According to the eyewitnesses, Rubel was speaking to Pushpa in her room at the first floor of the building. Suddenly after entering into Pushpa’s room Major Kamruzzaman asked Rubel’s name. In reply Rubel reportedly said that his name was Asaduzzaman. The major then called a person from his cell phone and described Rubel’s complexion and appearance. Following the conversation the officer wanted to check whether one of the teeth of Rubel was broken or not. As Rubel showed his teeth, which were broken, the RAB team handcuffed him and started beating him with fists and boots while taking him out of the room. While they were beating Rubel, they insisted him to give them his firearms, which the RAB team alleged he possessed. Then, Rubel reportedly attempted to escape from the ongoing assault and ran towards the rooftop of the house. The members of the RAB that previously took position on the rooftop caught him.

Then, Rubel was brought to the middle of staircase between the first and second floors where Major Kamruzzaman pointed a pistol on the left side of Rubel’s head and shot him. The RAB officer also shot him in the stomach. Rubel fell on the floor bleeding from his head and abdomen, and died at the scene in few minutes.
The statement of Mohammed Rumi the brother of Asaduzzaman Rubel who was killed by Rapid Action Battalion -10 from Human Rights Watchdog on Vimeo.
After the alleged extrajudicial killing of Rubel the team major Kamruzzaman of the RAB-10 asked his subordinate to shoot him in his left leg, however, it did not bleed and his colleagues bandaged his leg. The members of the team allegedly shot a number of blank shots. Major Kamruzzaman gave his pistol, which was allegedly used to kill Rubel, to his colleagues and ordered it be put beside the dead body. He also asked his colleagues to scatter the used bullets around the dead body, which was later taken to the Dhaka Medical College Hospital (DMCH) morgue.

After making the arrangements, the RAB asked some local people, who gathered around the building hearing the sounds of gunshots and seeing the vehicles of the RAB, to identify the deceased person. They claimed that the deceased person died in "crossfire" during a "gun-battle" between the deceased and the RAB. Showing a bandage at the foot Major Kamruzzaman claimed in public that he and his colleague constable Abdul Quader had been injured.

Contrary to the account by the RAB, the relatives of the deceased and the local people, claiming themselves as the eyewitnesses of the incident, said that no “gun-battle” took place at the time of the incident. The eyewitnesses claimed that had there have been any “gun-battle” in broad day light in a overcrowded place like Sharulia there would have been more people killed in the same incident. Besides showing the place of death, which was inside the staircase, the relatives argued that any kind of “gun-battle” was not possible inside the house.

Rubel’s older brother claimed that a person, who is reportedly an immigrant in Japan, offered a big amount of money to Rubel a few weeks earlier to kill that person's own wife named Sultana Akther Rupa. When Rubel refused to kill any person and revealed the information to the woman trying to save her life, the husband became vindictive to Rubel. The man allegedly hired Major Kamruzzaman of the RAB-10 by paying a huge amount of money to kill Rubel, who might be a witness of any case regarding the conspiracy of killing his wife.

The members of Rubel's family allege that the police and members of other law-enforcement agencies in plain clothes cordoned their house after the dead body of Rubel was brought for burial after the post-mortem. The law-enforcing agents did not allow the relatives to see the dead body and insisted them to bury the body within an hour of the arrival of the body in the evening of 17 March. The police asked the relatives not to make any noise regarding the death of Rubel anymore.
Posted by Bangladesh Media at 5:43 PM