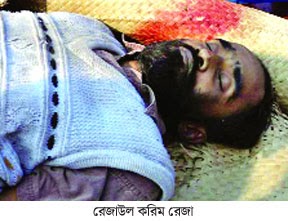 A regional commander of Purba Banglar Communist Party (Lal-Pataka) was killed in a ‘shootout’ with police in Ataikula of Pabna early Thursday. The deceased, Abdul Hamid alias Thosha Hamid, 32, son of Abdur Rashid of Kakilakhali village in Ataikula, was accused in a number of cases including three for murder, police sources said.
Officer-in-charge Habibul Islam of Ataikula Police Station said a team, led by him, started a drive at Kakilakhali village to catch outlaws shortly after the midnight. But when they reached near Kakilakhali Beel at about 3:30am, Hamid and his gang opened fire on the police personnel suspecting them as their rivals. In reply, police fired shots, triggering a 20-minute ‘gunfight’. The law enforcers found the bullet-hit body of Hamid after his associates fled the scene, reports our Pabna correspondent quoting the OC.
Another incident took place in Sathia Upozila of Pabna on early Wednesday. The deceased Rezaul Karim Reza was a regional commander of the East Bangle Communist Party (ML Jano Juddho). He is the son of Khalilur Rahman of Nurdaho Village of the same upozila. RAB 12 demanded; they have been informed that a couple of criminals gathered in a brick field of Nurdaho village in Dhulauri Union. Sensing RAB presence the alleged ‘criminals’ open fire on them and compelled to fire them back. Reza died when he came in line of fire.
On January 30 in London Lord Avebury, the chairman, Standing Committee of Human Rights of the House of Lords, Abbas Faiz, Bangladesh Researcher of Amnesty International and Brad Adams, the director of Asia of Human Rights Watch met Prime Minister Sheikh Hasina, foreign minister Dipu Moni and other government officials about the human rights situation in Bangladesh. Three incidents took place and three men were killed just after the prime minister's meeting with the human rights leaders during her visit in London.
The prime minister assured the HR leaders that she will take action if anybody found guilty and will act to stop extra judicial killing in Bangladesh.
Posted by Bangladesh Media at 1:06 PM