Where are the Bangladesh ‘death squads’ for the UK government to train?

Condemning the British government for its engagement with RAB—without any actual evidence that the training it provides facilitates RAB in violating human rights—risks preventing the organisation from gaining the skills and capacity that might allow it to develop into a human rights compliant organisation, writes David Bergman.
THERE has been much in the WikiLeaks cables that is new, revelatory and damning, but the recent ‘disclosure’, published by the Guardian newspaper, claiming wrongdoing by the British government in providing training to Bangladesh’s law enforcement body Rapid Action Battalion is far from being any one of them. 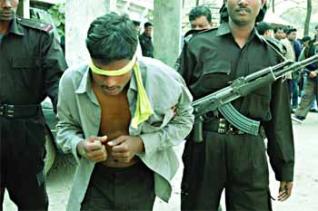 The article describes RAB as a ‘death squad’, and suggests that the British government training may well have increased RAB’s criminality, at one point reporting that its journalists asked the UK’s National Policing Improvement Agency whether its ‘courses in investigative interviewing techniques might not render torture more effective.’
If these claims were true, this would, of course, be a significant scandal. Yet, they are unsubstantiated.
Unlike the suggestion in the article, it has been no secret that the UK government has provided training to RAB.
In April 2009, Human Rights Watch itself had reported that, ‘The United Kingdom and the United States’ were providing ‘training to RAB in the stated hope that the force will improve its human rights record and eventually become a more effective counterterrorism outfit.’
And, after the Guardian article was published, the news agency AFP reported that, early in 2010, Duncan Norman, Britain’s deputy high commissioner in Bangladesh, had given it an on-the-record interview about the training the British government provided to RAB.