Does it affect anyone? 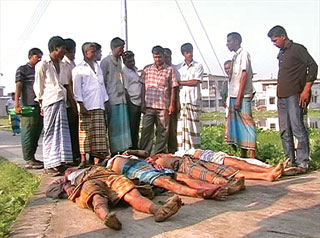 By Bangladesh Media: A country turns to Valley of Death when one of it's newspaper report-statistics shows that during a democratic regime 263 people died in extrajudicial killing! A Bangladeshi newspaper daily Amar Desh published the statistics while 6 more people died in extra judicial killing in Dhaka, Kushtia and Meherpur in the name of Crossfire, shootout, encounter! Report says during Awami League regime 263 people died in extra judicial killing, 52 of them died while they were under law enforcers custody. And all executive and judicial probe justified these killings!
The new phenomenon of extra judicial killing emerged as Force Disappearance. On June 25 of this year Chowdhury Alam, a Bangladesh Nationalist party (opposition) leader and Dhaka City Corporation word commissioner kidnapped by plain cloth law enforcers  and disappeared since then. His privet driver claims that it was Rapid Action Battalion in plain cloth as they introduced themselves about their identity. Then they took Alam with them.
Dated on October 11, BD News 24 reports that Elite crime fighters RAB have shot dead a youth in the capital's Tejgaon area. RAB claimed that this youth was a local criminal, according to the police. Sub-inspector of Tejgaon industrial police Monir Hossain said RAB personnel challenged the youth around 9pm on Monday when he was riding a bike in an alley next to the BG Press.

RAB members claimed they retaliated when the youth shot at them as a response to their challenge. He was taken to Dhaka Medical College Hospital with several bullet injuries, where he was declared dead. The police officer said one firearm had been recovered from the youth's possession.
Dated on October 12, A regional leader of East Bangle Communist Party (ML-red flag) died in Gangni, Kustia District while Rapid Action Battalion (RAB) opened fire against him later a RAB spokes person reports he died in "cross fire". The diseased, Aksed Ali 45 identified as a terrorist by the Rapid Action Battalion, as usual.
Dated on October 12, 4 member of East Bangle Communist Party (Jano juddo) died while police told that they were kill by the village people while they were preparing for a robbery! Reports the daily Jay Jay Din .
Posted by Bangladesh Media at 8:10 AM