It is just a number that's rising! 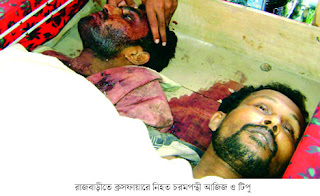 By Bangladesh Media, The daily New Age reports that two ultra-left outfit operatives were killed in an ‘encounter’ of the Rapid Action Battalion at Bhatshala of Pangsha in Rajbari early Tuesday. Tuesday’s incident took to 208 the number of people killed in incidents such as ‘crossfire’, ‘encounter’ or ‘gunfight’ after January 6, 2009 when the Awami League-led government assumed office. The Awami League in its election manifesto pledged ‘an end to such extrajudicial killing.’

Fifty-three people have so far been killed since the High Court on December 14, 2009 asked the authorities not to kill any more people in ‘crossfire’ or ‘encounter’ until it hears a rule it issued suo moto on the government in connection with extrajudicial killings.

The deceased were Mohammad Abdul Aziz, 38, and Dipu Kumar Das, were regional leaders of Purba Banglar Communist Party (Red Flag). A Rapid Action Battalion team raided Bhatshala about 3:45am on information that gangsters were engaged in a gunfight at the place.

Abdullah Al Mahmud, senior assistant superintendent of RAB 8, said as the team reached the place, the gangsters the fired into the team. The lawmen fired back, Mahmud said. When the outfit operatives got away after about 30 minutes, the lawmen found Aziz and Dipu lying dead.


The battalion official said they had seized a shooter gun, a light gun and 10 bullets from the place.
Posted by Bangladesh Media at 10:46 AM