Political will a must for end to custodial deaths. 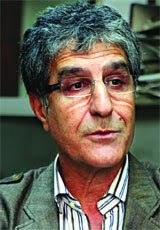 By Shahiduzzman and Abdullah Juberee, Political will is imperative for an end to death in custody and other human rights violation, so says Abbas Faiz, the Bangladesh researcher of Amnesty International. ‘It requires political will to stop custodial death or torture. It requires determination of the political authorities, including the government and the opposition,’ he said in an interview with New Age last week.

Faiz, who was in Dhaka as the head of an Amnesty delegation, also emphasised enactment of a specific law that will enable people to file complaints against members of the law enforcement agencies for torture. He welcomed the High Court order for investigation of three recent incidents of custodial death but said the government should not wait for a court order to launch inquiries into any allegation of human rights violation.

‘In the recent cases, some police officers have been suspended. It could not have happened if there had not been an outcry,’ he observed. ‘It is a systemic failure because it should not be like that. You should not have to wait for a public outcry to see government action.’ Faiz also said the government and the political parties need to uphold the right to freedom expression and the freedom of the media because these are prime prerequisite for protection of human rights in any country. Excerpts:

How do you assess the human rights situation in Bangladesh, especially in view of deaths in custody and extrajudicial killings?
Any killing is a violation of human rights. We in Bangladesh are dealing with two types of killing. One relates to killing in custody, which, again, is of two types – in police custody and in prison. The other is what people generally know as extrajudicial executions. These are killings of people who have been arrested or are not in a position to pose any threat against law enforcement personnel. The law enforcement personnel are nonetheless using lethal force against them causing severe injuries or death. So these are all human rights violation. And Amnesty International has always raised its concern about extrajudicial killing, extrajudicial executions, whether in the custody of police or in the custody of jail officials.

In that respect I think we have a very interesting situation now. The High Court has ordered the police and the government to investigate three deaths in custody. This is a welcome development. We welcome and congratulate the High Court for taking such a strong position with regard to a case of human rights violation.

However, the government must not wait for a High Court order to react. Whenever there is a case of human rights violation, be it custodial death or extrajudicial killing or torture, the government needs to come forward and launch an investigation; it needs not wait for the court or any other party or institution to tell it what it should do.

What about investigations into extrajudicial killings? The police are often asked to probe incidents of extrajudicial killings by their own people. Can these inquiries be impartial?
The directive of the High Court is unequivocal in this regard – that such an inquiry has to be done by any agency other than the police. In Bangladesh, Amnesty has come across cases where people go to the police to file a case and the police refuse to file a first information report on the ground that there is no case. If they do register an FIR, it will very likely go against their own people or somebody who has something to do with the police station concerned. So, technically you are asking the police officers to investigate themselves.

Moreover, just because they are the accused, it does not mean that they have no control over the evidence. It is possible that, in the course of the investigation, they may destroy the evidence. Hence, the High Court has sought to draw the line. Regrettably, however, the system has not been reformed to the desired level because of the failures of successive governments.

As such, when a custodial death takes places, it is prone to being covered up, until and unless the media or the human rights organisations take up the issue. Recently, some police officers have been suspended but, in my view, that would not have happened had there not been an outcry. It is unfortunate; after all, one should not have to wait for public outrage before the government takes any action in such cases.

Moreover, the constitution requires the government to ensure that torture does not take place. It needs not wait for the High Court to point out that custodial death is wrong; the government itself knows that it is wrong. Besides, Bangladesh is party to a number of international human rights treaties, including the convention against torture. Parliament has ratified convention; hence, it is the government’s responsibility to prevent torture.

The immediate-past chairman of the human rights commission asked the government on more occasions than one for formation of independent inquiry committees, comprising government officials and human rights activists, to investigate custodial deaths and extrajudicial executions. Why do you think the government has thus far not paid heed to the request?

Amnesty International also suggested that Bangladesh should have an independent police complaints commission. Any investigation of any human rights violation – be it torture or death in custody – should be done by a party that has three distinct characteristics – independence, impartiality and competence. The third characteristic is very important for such inquiries to produce results.

Regrettably, however, we have seen over the years that any such investigations do not take place in the first place, largely because of the reluctance of the authorities. Such inquiries must take place within a reasonable period of time. But there are cases that have continued for years, even decades.

The High Court has issued a number of rules on the government vis-à-vis protection of human rights. However, the government more often than not do not comply with the rules. Worse even, it sometimes refuses to report to the court on its adherence to the rules. Why so?
It is really a matter of grave concern. In 2003, in a landmark judgement, the court laid out a set of guidelines on how the police should conduct interrogation. While the guidelines were forwarded to the authorities, no effective actions were taken to ensure compliance with those.

A new trend in human rights violation seems to have emerged in Bangladesh in recent days. Plainclothesmen pick up an individual, sometimes from his house; and his body is then found a few days later, with the accused agency claiming that it knows nothing about the matter.

Amnesty International has been looking into such cases. When the police find a body, they have to take its photograph, file a report and send it for post mortem. There have been cases in which a family could not trace one of their relatives and, after vigorous search, discovered that the individual had been buried in a graveyard. They had the problem of finding the grave of their relatives because there was no record. That is one part of such cases.

We have also found that people were picked up by law enforcers only to be found dead a few days later, with the law enforcers claiming that they knew nothing about the victims although the members of the victims’ family claimed that the deceased had been in the law enforcers’ custody. Such was the case in one of the three recent deaths in custody and it was alleged that the man was tortured to extract money. It is imperative that the authorities should take note of such incidents.

Another difficulty is that there is no specific law forbidding torture. The constitution forbids torture but you need a law to enable people to file a complaint against an official for committing torture. We do not have that. But there is a draft law which was placed in parliament but I do not know the latest development with regard to the bill. It was a private member’s bill.

However, I want so say that a law alone can never stop torture or deaths in custody. It requires political will to stop custodial death or torture. It requires determination of the political authorities, including the government and the opposition.

What is your take on press freedom in Bangladesh in view of the closure of a newspaper and two television channels?
I think press freedom is a necessity for a country that is developing and strengthening its institutions. Without the freedom of the press, it is very difficult for people to know what is happening. Amnesty International has found journalists in Bangladesh to be the first point of contact for people whose rights have been violated. It is very important to strengthen the capacity of journalists. The government and the political parties have to uphold the freedom of expression and the freedom of the press because these are a fundamental necessity for protection of human rights in any country.

How do you look at the incidents of repression on opposition political activists that took place recently?
We issued a press release emphasising at least one case that came to our attention that the police had used excessive force against people, people who did not pose any threat to them. In the statement, we specified that the law enforcement agencies should not use excessive force in dealing with demonstrations.

Posted by Bangladesh Media at 9:21 PM