One Day Record for Extra Judicial Killing in Bangladesh 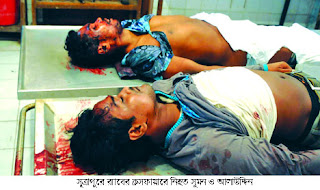 By Bangladesh Media, Four crime suspects were killed by the Rapid Action Battalion and the police in ‘crossfire’ at Ganderia and Mirpur in Dhaka and in the Kushtia district headquarters early Wednesday. Wednesday’s incident took to 181 the total number of extrajudicial killing in incidents such as ‘crossfire’, ‘encounter’ or ‘gunfight’ after January 6, 2009 when the Awami League-led government assumed office.
Twenty-seven people have so far been killed in extrajudicial incidents after the High Court on December 4, 2009 asked the authorities not to kill any more people in ‘crossfire’ or ‘encounter’ until it hears a rule it issued suo moto on the government in connection with extrajudicial killing.
The men killed in ‘crossfire’ on Wednesday were Mohammad Alauddin, 32, and Suman Rahman, 27, residents of Gendaria, Rahat Ali, 30, a resident of Mirpur while ultra-left outfit operative Milon Fakir alias Jibon, 30, a resident of Shimulia in the Kushtia district headquarters. In Dhaka, the battalion said its team raided the Albert High School ground at Gendaria about 3:00am on information that some miscreants were holding a meeting there.
‘The gangsters fired into the law enforcers, who fired back, leading to a gunfight,’ said the RAB 10 commanding officer, SM Kamal Hossain. He said the gunfight had continued for more than half an hour. Suman and Alauddin, who were wounded in the gunfight, were taken to Dhaka Medical College Hospital where they were pronounced dead soon after their arrival, Kamal Hossain said. The battalion seized three revolvers and two bullets from the place after the gunfight, the battalion official said. The police said Alauddin and Suman had been engaged in criminal activities such as murder, abduction and extortion in the city. They were accused in several cases related to murder and extortion filed with the police, the battalion claimed.
In the other incident in Dhaka, Rahat Ali, suspected of being involved in snatching, was killed by the police in ‘encounter’ at Pallabi of Mirpur. The police claimed Rahat Ali was involved in killing assistant subinspector Shah Mizanur Rahman of the Ramna police, found dead on a road in Tangail on May 4, and ATN Bangla cameraman Shafiqul Islam Mithu, found dead by the River Turag on May 9.
Based on the statement of a suspected mugger arrested earlier, the police said they had raided the Pallabi Eastern Housing area about 2:45am. As the lawmen approached, the gang who were inside a car fired into the lawmen, who fired back. After a gunfight for half an hour, the police found Rahat dead. The police also seized a pistol from the place. The police also seized the car. Rahat’s associates, however, managed to get away, the police said.
In Khustia, a Gana Mukti Fauz operative was killed in a ‘shootout’ with the police at Shimulia in the district headquarters. The deceased, Milon Fakir alias Jibon, 24, was an operative of the ultra-left outfit, the police said. A police team raided Shimulia on information about a gathering of at least 25 operatives at a place about 4:00am.
As the lawmen approached, the gang fired into the lawmen, who fired back. Milon was caught in the ‘crossfire’ and died on the spot and his associates managed to get away, the police said. The policemen seized a gun and six bullets from the spot.
Posted by Bangladesh Media at 7:58 AM