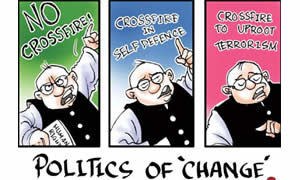 By S. M. Anwar Hossain, ‘Shootout’, ‘Crossfire’, and ‘encounter’ all these words have the same meaning in context to Bangladesh. Like same licker in different bottle in different name. Taste of that licker is same as the meaning of these words are same – ‘Extra Judicial Killing’!

According to Wikipedia, "Extrajudicial killings are the illegal killing of leading political, trade union, dissident, religious, and social figures by either the state government, state authorities like the armed forces and police (as in Liberia under Charles G. Taylor), or criminal outfits such as the Italian Mafia.

Extrajudicial killings and death squads are most common in the Middle East (mostly in Palestinian territories and Iraq) Central America, Afghanistan, Bangladesh, India and Indian-administrated Jammu and Kashmir, several nations or regions in Equatorial Africa, Jamaica, Kosovo, many parts of South America, Chechnya, Russia, Uzbekistan, North Ossetia, parts of Thailand and in the Philippines."

Officially Extra Judicial Killing was introduced in 2004 just after the formation of the Rapid Action Battalion named RAB by the Government of Bangladesh Nationalist Party (BNP). Since then RAB recognize more than 633 extra judicial deaths by itself in the name of ‘Crossfire’, ‘Shootout’ or ‘Encounter’. RAB explains these events as self defense against terrorism.

During the interim caretaker government the density of this event extra judicial killing rose and by the campaign of the media and human rights defenders this event was introduced as a Para normal activity by the State. Peoples of Bangladesh raised their voice through media. Awami League declared in their election manifesto that it will stop the Jxtra Judicial Killing in Bangladesh. It will make a ‘Change’, as Mr. Obama, the President of the United States wanted to make a ‘Change’. Bangladesh Awami League wins the election and formed the government in January 2009.

Now the people of Bangladesh started to realize that it was a lie. Just a big lie! The total number of extra judicial killing is 158 since Awami League came to the chair in January 2009. We remember the election manifesto that was declared by the Bangladesh Awami League in December 2008. And we also remember that extra judicial killing was introduced by the same party in 1972, while Sheikh Mujibur Rahman screamed in the Parliament -“Where is Siraj Shikhder Now?” Nothing has changed!