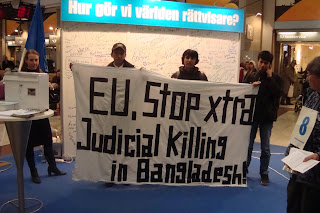 By Bangladesh Media, Some Bangladeshi student studying in Stockholm, have organized a demonstration in Sweden, against the Extra Judicial Killing taking place back home in Bangladesh. They appeal to the European Union to act on the issue as European Union is a development partner of Bangladesh.

At the same time they condemn the recent attack on Drik just before the opening ceremony of the photography exhibition on extra judicial killing named 'Crossfire'. "we consider this as a very fresh and violent attack on the freedom of expression. As the constitution of Bangladesh ensured the 'Freedom of thought and conscience, and of speech' through the Article 39. And Freedom of Expression is also ensured in Article 19, through the universal declaration of Human Rights in 1948 at Geneva Conversion. So, The universal declaration of the Human Rights have been violated in Bangladesh, EU and UN must act on the gross violation of Human Rights in Bangladesh" - said Anwar Hossain a research student studying in Journalism.

They also express their concern regarding the recent situation of press freedom in Bangladesh. Violent attack against Journalists and death threats to Nurul Kabir, the Editor of the Daily New Age, Defamation law suit, death threat, and attack on Mahmudur Rahman, the Editor of the Daily Amar Desh, attack on the journalist Monirul Islam of Daily Lok Somaz, Jessore and the closing of the Drik photo exhibition on cross fire.