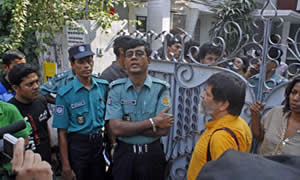 By Bangladesh Media, Police on Monday shut down Drik Gallery in Dhanmondi just before the start of a photo exhibition on extra judicial killings by the Rapid Action Battalion, saying the exhibition would create ‘unrest.’

Drik Gallery officials told The Daily Star that the gallery was closed around 3:30pm, which was set to start the exhibition of photos by Shahidul Alam styled 'Crossfire' at 4:00pm. The organisers said a police team led by Dhanmondi police chief Shah Alam entered the premises of Drik Gallery without permission and asked the authorities to cancel the exhibition immediately. But the Drik authorities refused to shut the gallery as the photos on display were symbolic and allegorical.
Police could not show any warrant, court order or any executive order, they said. As police barricaded the entrance of the gallery, the organisers opened a street exhibition outside Drik Gallery. Noted Indian writer and human rights activist Mahasweta Devi inaugurated the event along with Nurul Kabir, editor of the New Age, M Hamid, chief executive officer of RTV and Jorge Vilacorta, a curator from Peru.
Posted by Bangladesh Media at 10:04 AM